An Inconvenient Death at the Magic Game

The notice on Facebook said that the demonstration would begin at 5 PM at the Florida Agricultural and Mechanical University Law College campus. It was a rally to protest the string of cases of black victims of largely white police brutality.

When I saw the notice I knew I had to go. I simply cannot remain silent in the face of what is beginning to look like an epidemic of police brutality in which black lives are presumed to be less valuable than any others. That sick feeling in my stomach as I watch the reports of deaths coming out of cities like Cleveland, New York and St. Louis cannot be ignored.

America, we have a serious problem. We ignore it at our peril. 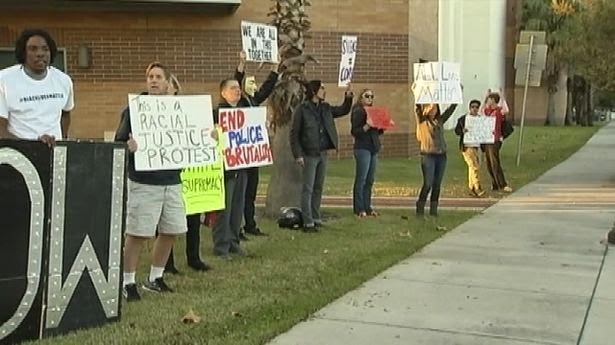 Marching in a Sea of Anxiety

We were taught the chants we were to use in our protest by a young man with a bullhorn as we stood on the corner by the law school. “No justice, no peace.” “Black lives matter.” “Tell me what democracy looks like - *THIS* is what democracy looks like.” “I can’t breathe.” And, then, after a few announcements, we were off to the Amway Center for an encounter with the crowd coming to the Orlando Magic basketball game. I shared that march with four colleagues from the Philosophy Department. It was good to be with people of intellect, a sense of justice and courage to act on it. Truth be told, we had no idea as we departed the law school campus what we would encounter along the way. For the record, the Orlando Police were orderly, polite, non-interventionist and blocked off the streets along the way to keep protesters and motorists alike safe. To paraphrase our own chant, “*THIS* is what a trustworthy police department looks like.” 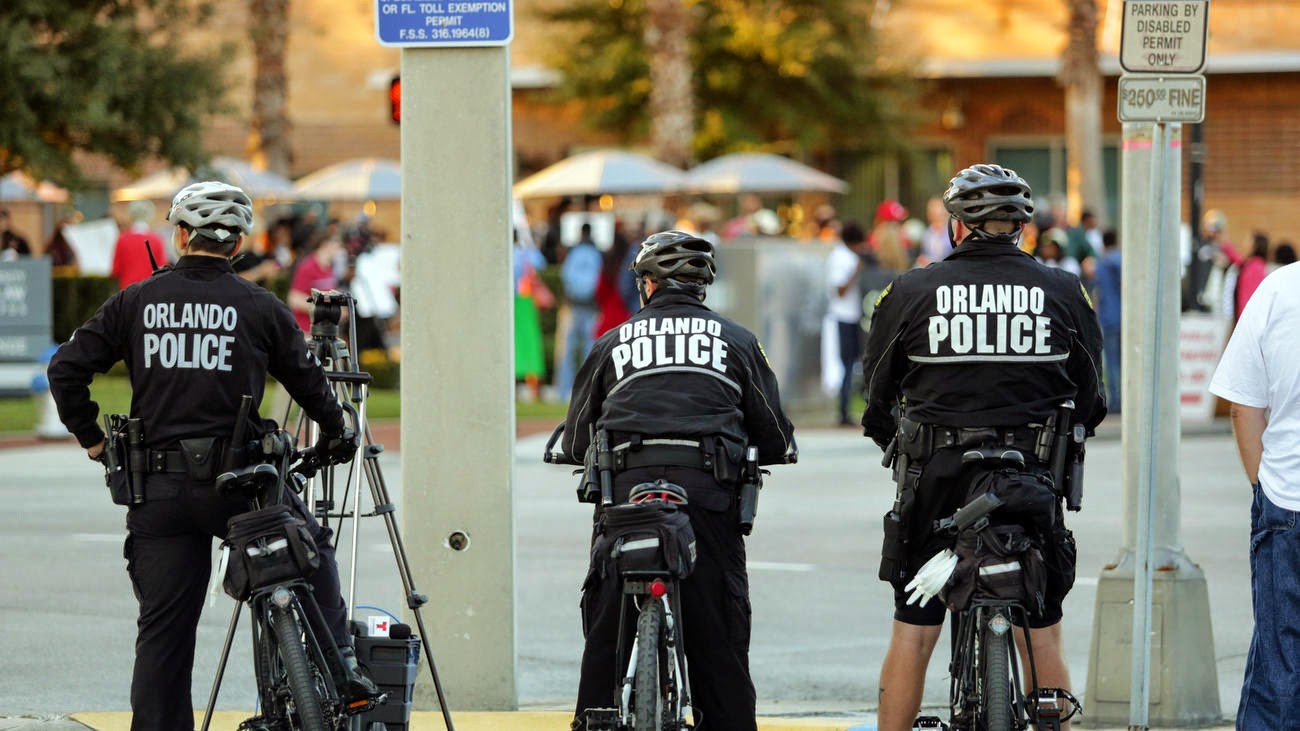 But a mere four days prior an unarmed black man in Orlando had been shot dead by this same police department in an impoverished area of town. And the images of militarized police and national guard violently engaging crowds like this one from places across the country were only too fresh in the minds of many in our group of 300 as we marched down Orlando’s main drag, Orange Avenue. 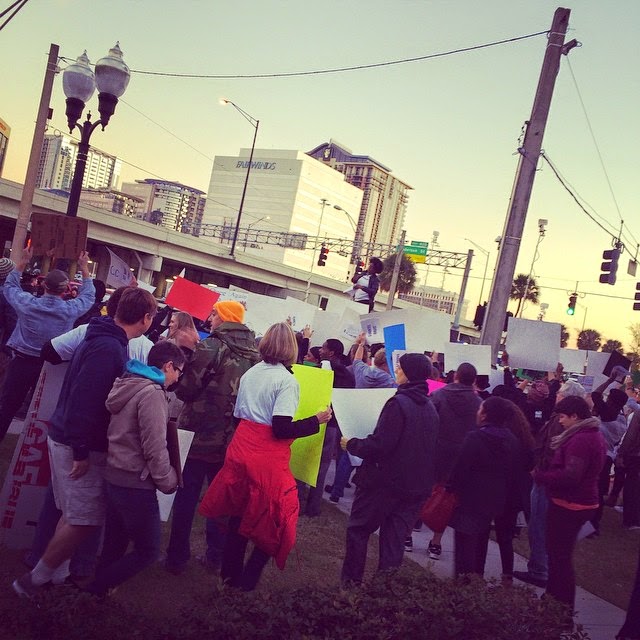 Four helicopters buzzed overhead, supposedly taking aerial photos of the events. Helicopters always make me a little nervous, no doubt a little post traumatic stress from my days as observer in El Salvador. There US supplied helicopters poured napalm from the sky consuming everything below in a rain of fire. They also served as sniper’s nests for marksmen aloft and were sometimes used to toss out rebels who plunged hundreds of feet to their death, this sending a bold message: This is what happens to those who challenge the regime.


Death at a Sporting Event

The scene at the Amway Arena was surreal. It was twilight with the last sunlight a starburst of light at the end of Church Street. At the signal, we all lay down in the street to affect our die-in, remaining lifeless on the cold concrete for 15 minutes to symbolize the number of times Eric Garner had vainly protested “I can’t breathe” to the officer who choked him to death.

Around us, fans streaming to the Orlando Magic game stopped and stared at the incomprehensible sight of 300 people laying lifeless in the street. Many took their cell phones out to snap photos. Booming public announcements reminded patrons that they could not smoke in the arena, that they could not bring in large bags or briefcases and that they might be searched coming into the facility. All of this for their safety, they were assured.

The juxtaposition of entertainment, security and this reminder of death was jarring.

Some of us had been issued a piece of typing paper with a name printed on it. We would be that person in the die-in. And so I became a young black woman named Shantel Davis, a 23 year old black woman shot by an NYPD officer after she crashed her car following a police chase. I had only briefly heard of this case prior to last night so I came home and looked it up online.

Davis had been accused of attempted murder and kidnapping in a gang-related crime and the car she was driving through red lights was reported stolen. The official version of the story said the unarmed Davis was shot as she resisted arrest in the car. Witnesses say Davis had her hands in the air when she was shot and later bled to death on the streets of Brooklyn.

The officer who killed Davis was also African-American. With over 800 arrests, primarily for narcotics offenses, Phillip Atkins sounds like a hero. That is until you look at the rest of his record: six federal lawsuits for police brutality that has cost the NYPD and the taxpayers of New York a quarter of a million dollars in settlements.

There were no good guys in that encounter as is often the case. 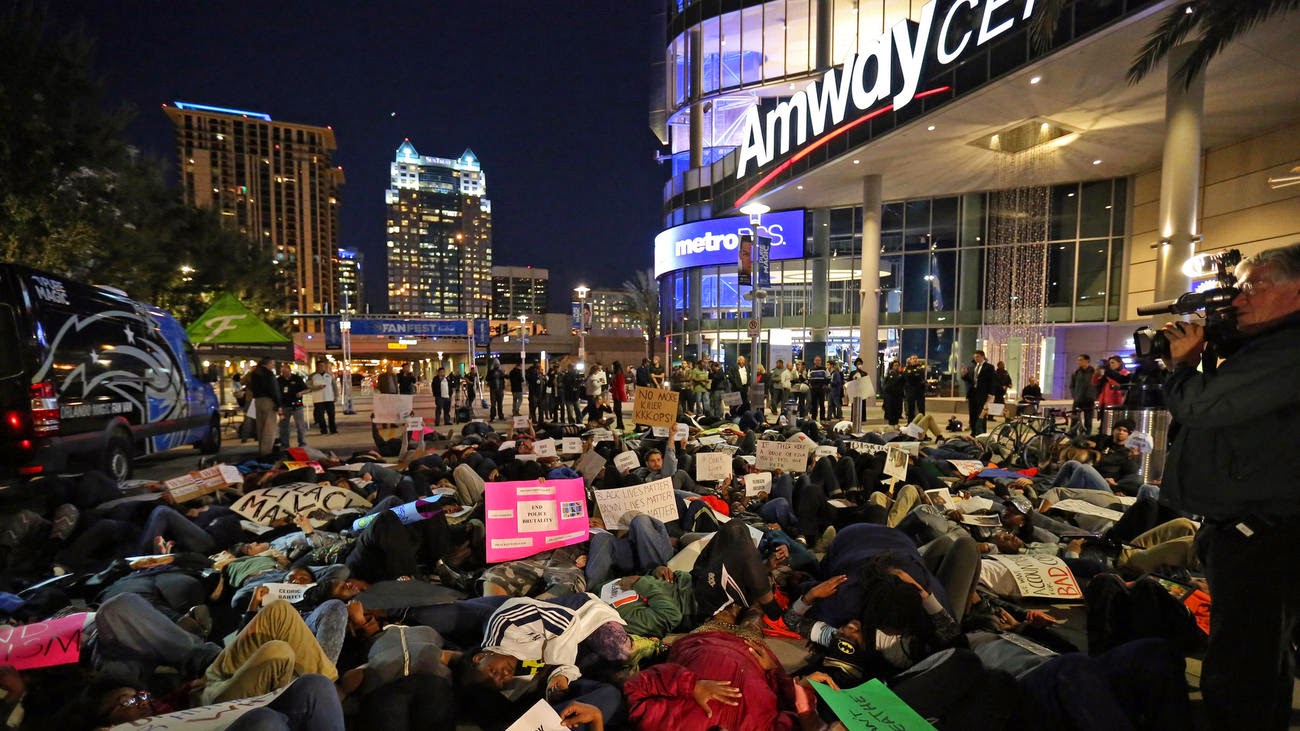 As I lay on the cold concrete last night, Arena patrons sipping cocktails looking down on us from the balconies, news reporters lighting up the bodies in the street with their cameras, helicopters buzzing overhead, stars beginning to come out, I was very aware of the fact that in just 15 minutes I would be getting up and going about my daily life.

Shantel Davis never had that opportunity.

I have largely given up watching televised news these days. It rarely informs me in anything other than a superficial fashion and one has to endure a barrage of consumerist conditioning to get even those little nuggets. Worse yet, under the rubric of entertaining their audience (i.e., the potential customers of the consumer goods being peddled), newscasters engage in some of the most banal and sometimes intellectually insulting chatter that human beings are capable of. These programs rarely inform me and inevitably irritate me.

After being alerted by one of my colleagues that our photos had shown up on a television station’s website, I began to listen to the various newscasts on the protest to hear how they had described the event. What I heard was troubling.

Several stations sought to minimize the turnout, describing the crowd as “dozens” of protesters in their broadcasts even as the printed reports on their sites accurately described the crowd at 300. Why the discrepancy? Is this a strategy to dismiss the protest as trivial?

Most of the newscasts noted the local connection to the protest with the shooting in Pine Hills earlier this week. Here an emerging tactic of propaganda was used. The talking heads repeatedly emphasized that the events of the shooting were “conflicted.” This translates to “anything but the official version is unbelievable,” a tactic in the same category as the use of “controversial” which is increasingly used by talking heads to signal to people “we have to report this but you should ignore it.”  At least “conflicted” refers to something of substance.

What was most interesting in the coverage was the angle used. Almost every local channel focused on the fact that the protest had caused streets to be temporarily blocked (the protest moved through in about 15 minutes), that diners in local restaurants were forced to observe the protest coming by and that fans headed to the Magic game might be late.

For the record, the most thorough and comprehensive coverage came from the local Fox affiliate, Channel 35. It was also the coverage that focused most on the substance of the protest rather than dismissive minimalization and focus on the inconvenience of Magic fans.

It was also the only station with a black talking head.

This is Just the Beginning

At the end of the 15 minute die in, I struggled to get to my feet. “I’m getting too old for this stuff,” I said to the black man about my age next to me. A veteran of the civil rights movement of the 1960s, he said. “I was here before and I’m back again,” continuing  “I’ll keep coming back until there is justice.”

This is the first chapter in a much longer story, I fear. Indeed, as I lay on the concrete, praying, the small, still voice whispered to me, “This is just the beginning.”

I'm appalled by the comments on FB stated by the poster: I'm so tired of hearing about Ferguson."
My response "You wouldn't if you were black." Other statements denying there is an racism or police brutality causes me to wonder just how connected folks are to anything around them that doesn't impinge on their comfort.

It was good to hear that you were part of a group of fellow UCF professors of philosophy in this action. It was an important action to bring attention of the general populous of Orlando the disproportionate amount of injustice suffered by the black community in police confrontations. Sorry to agree that this is just the beginning.