How Big is Your G-d?

“For many are called, but few are chosen.” 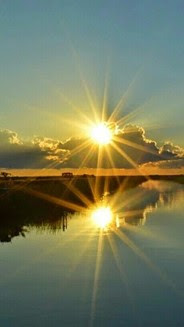 The parable of the wedding banquet is familiar to many of us, appearing in two of the canonical Gospels as well as in the non-canonical Gospel of Thomas. What biblical scholars recognize in stories which appear in multiple places, each with slightly different presentations, is that there is a common source from which this story was developed. 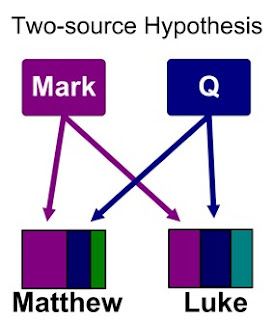 That source, which the writers of Matthew and Luke begin with, is sometimes called Q, short for the German word Quelle, or source. The way that the Q material is presented in any given gospel can offer us some clues as to who the historical Jesus actually was on the one hand. But they also tell us even more about the early Jesus movement which preserved these stories and the way a given community used those stories to write the gospels they produced.

In Luke’s version of this parable, which scholars believe is the closest of the three to the original story,  the giver of the feast is not named but it is clear he is wealthy enough to plan a big dinner and invite many guests. As in Matthew, the invited guests turn down the invitations one by one, some for business reasons, others for personal reasons. When the master of the house hears his invitations have been refused by his guests, he instructs the servants to go out into the streets and invite those they encounter to come and eat this festive dinner. 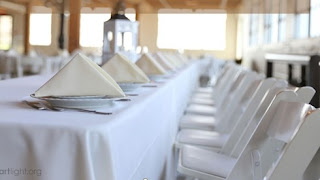 At a basic level, the writer of Luke is reflecting one aspect of the growing Jesus movement at the end of the first century. It is a movement that has largely been rejected by those of means and high stature. But it has proven to be good news to those on the margins, those whose very existence suggested that they had no value to Caesar’s empire or to the Temple cult  of Judaism from whose worship they were excluded by virtue of their poverty. As in many of the parables that appear in Luke, the expected order of the Judean world is reversed: the last become first, the first become last.

In today’s Gospel, Matthew’s writers have taken this story in a very different direction. Matthew begins by asserting that the parable is about the Kingdom of Heaven and thus the king of the parable is a stand-in for G-d. As in Luke, the story begins with the plans for a big wedding celebration for the king’s son. And as in Luke, the special guests refuse their invitations, preferring to focus instead on their businesses and personal lives. Some of them go so far as to kill the slaves sent as messengers.

In response, the king sends armies to kill the murderous invitees. But his wrath and vengeance do not simply punish the wrongdoers. His armies burn their entire cities. All the residents of those cities will suffer regardless of whether they were involved in this wrongdoing or not. It is only then that the king sends his slaves into the streets to invite whomever they could round up. But the king’s anger is not complete spent yet. When he notices a guest without the proper attire for the party, he confronts him, kicking him out of the party into the darkness where there is weeping and gnashing of teeth. 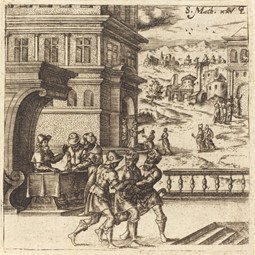 Leonard Gaultier, “Parable of the Talents (The Worthless Servant Cast into the Outer Darkness),” c. 1576/1580

Truth be told, I’ve always loved that line. It has a real ring to it. I used it regularly when I taught undergraduates at UCF and Valencia. Trying to assure them of the seriousness of an impending deadline for writing assignments I would warn them that if they waited until the last minute to get down to business and missed the assignment deadline, there would be great weeping and gnashing of teeth.

But Matthew is dead serious here. Emphasis on dead. And he ends his version of this parable with the assertion that “Many are called but few are chosen.”

It’s pretty clear that in both Luke and Matthew versions of this story, the wealthy party giver is a stand-in for G-d. But it’s important to note that each of them present a very different vision of G-d. And it is my observation that how one sees G-d makes a great deal of difference in how one sees themselves, how one treats other people and how one relates to the larger world outside themselves.

A Notion of Chosenness That Leads to Tragedy 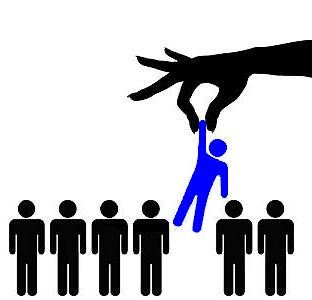 Today’s reading only makes sense when one sees it in its historical context. It’s important to recall here that the community out of which Matthew’s Gospel emerges found itself in a very difficult place at the end of the first century. On the one hand, the Jesus movement had been targeted by the Roman Empire for persecution that began with the crucifixion of Jesus himself and quickly martyred a number of the disciples. 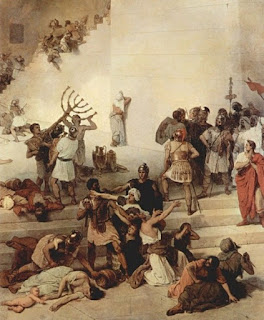 Francesco Hayez, "The destruction of the Temple of Jerusalem" 1867

Matthew is also writing in the period after the Temple in Jerusalem has been destroyed by the Romans. We hear an echo of that tragedy in the king’s burning of the city. A Judaism which had previously centered around sacrifice in the Temple had now become much more localized in synagogues led by Pharisee leaders now called rabbis

But the Romans are not the only concerns for Matthew’s community. Matthew’s Jesus followers have been expelled from the synagogues that once were their spiritual homes because of their insistence upon seeing the Way of Jesus as their way of living out their Jewish faith. There is an awful lot of anger and resentment in Matthew’s Gospel toward their former coreligionists often expressed in references to “the Jews, the Jews, the Jews.”. And so it’s not surprising that Matthew’s version of this parable develops a very thinly disguised theological motif called supersessionism. 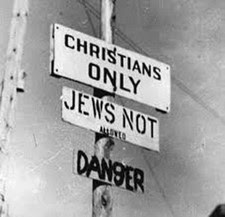 Listen again to the ending of Matthew’s lesson today: “For many are called, but few are chosen.” It doesn’t take much imagination to see where such thinking can take you. The theology of supersessionism is the foundation for a very long history of antisemitism of which the Holocaust is merely the worst incident. It is a tragic flaw that lies at the very heart of the Christian tradition which is only now being fully realized and will take even longer to repent for.

Clearly theologies of chosenness are incredibly self-affirming. To believe one has been chosen by G-d above all others and punishes those who have persecuted you is  a deeply satisfying endeavor.  But this is tribal thinking at its most basic and the god that is portrayed in such thinking is the inevitably the god of the tribe. 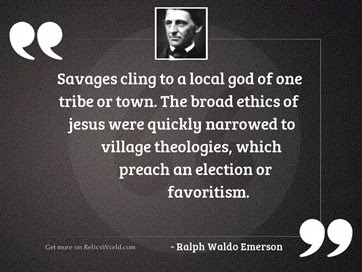 The implications here should trouble us. If this god is the god of our tribe, by definition it means that everyone else is outside the purview of the holy. And if the tribal god has no obligations to recognize their humanity, neither do the chosen people. The tribal god of Matthew’s wedding banquet burns downs entire cities when his honor has been impugned and shames and expels those who do not meet the banquet dress code into outer darkness. Whatever else that understanding of god may be, he is not the G-d of all creation that we find in the book of Genesis. And he is decidedly not the merciful Father whom Jesus says makes the rain to fall on the just and the unjust alike.

A Deity Who Embraces All

Clearly not all visions of G-d are the same. Indeed, in today’s lessons alone there are two visions of G_d that I suggest stand in complete contrast with one another. The lesson from Isaiah this morning depicts a very different deity:

a feast of rich food, a feast of well-aged wines,

And he will destroy on this mountain

the shroud that is cast over all peoples,

the sheet that is spread over all nations;

he will swallow up death forever. 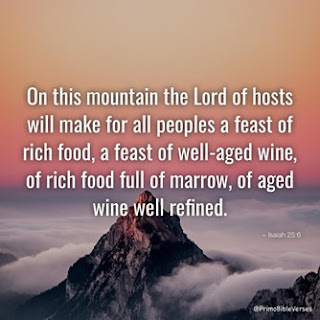 It’s important to note the universality of this vision of G-d. The word that is repeated over and over in this passage is the word “all.”  Unlike the insecure tyrant of Matthew’s wedding feast, this G_d creates a feast for everyone. His loving generosity casts away the shroud of sorrow of all the peoples. Even death itself is swallowed up by this G-d after which he wipes the tears from every face.

This is the G-d whom Paul Tillich would call the Ground of All Being, whom John of Patmos would call the Alpha and the Omega. This is the G-d from whom all of Creation flows in Genesis over a six day period at the end of which G-d assesses it all as very good. This, I believe, is a construct of G-d that is worth taking seriously. 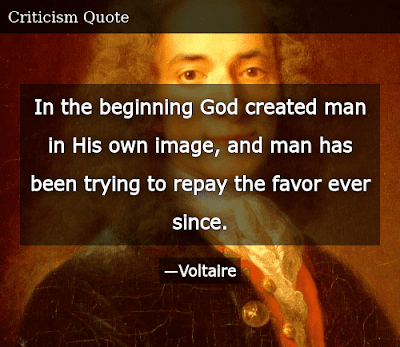 French philosopher Voltaire once said, 'In the beginning God created man in His own image, and man has been trying to repay the favor ever since.' At a very basic level, all of us construct our own images of the deity. So I ask you to consider this day, how big is the god you worship? What does your understanding of G_d reveal about the way you see yourself, the way you see others and the way you relate to the world?

Many of us have heard Anne Lamott’s adage that “'You can safely assume you've created God in your own image when it turns out that God hates all the same people you do.' Who are those your vision would cast into outer darkness to weep and gnash their teeth?  Where are the places your concept of G-d serves your own interests rather than the other way around? How big is the G-d you serve? These are tough questions but I believe they are central to our spiritual lives. And so I close with a prayer that many will find familiar but hopefully can hear in a different way after this morning. Let us pray:

Lord Jesus Christ, you stretched out your arms of love on the hard wood of the cross that everyone might come within the reach of your saving embrace: So clothe us in your Spirit that we, reaching forth our hands in love, may bring those who do not know you to the knowledge and love of you; for the honor of your Name. Amen.

You may view a live version of this sermon at the St. Richard’s Facebook site:

Good exegesis of the sources and thoughtful applications. Our era of tribalism on steroids isn’t a time for Matthew’s vindictive theology!