Celebration of the Birth of a Soulmate 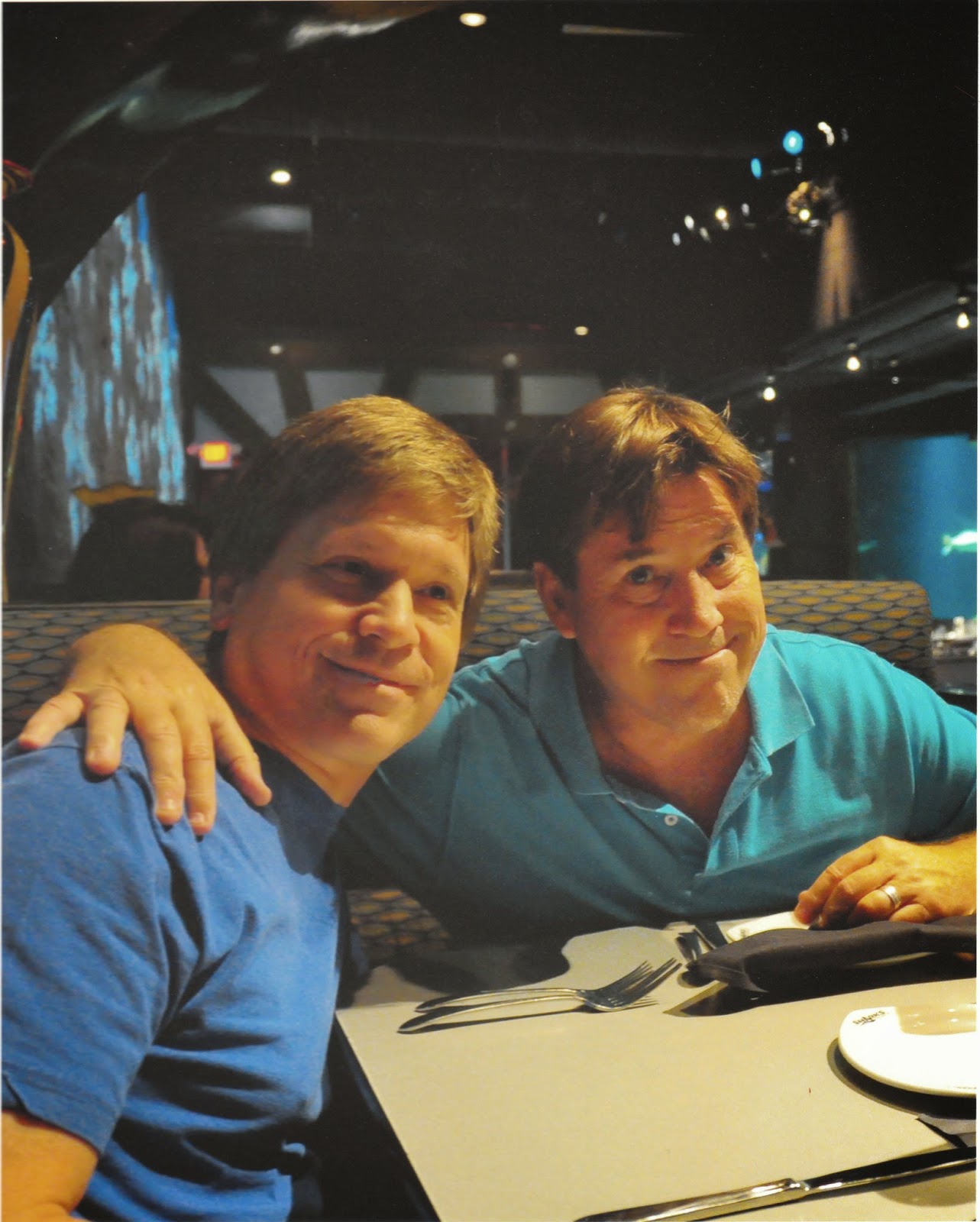 In the Shark Tank restaurant at Sea World, December 2013

Yesterday we celebrated the 61st anniversary of the birth of Andy Mobley, my life partner of 40 years this May 31 and my legal husband of five years this Aug. 13. We spent the evening at Seito, a Japanese restaurant in the Baldwin Manor neighborhood of northeast Orlando. The restaurant was deserted inside last night but all the tables outside were full. Happy people chattered around us as they enjoyed their sushi and wine, their dogs milling around our feet. We celebrated under a beautiful full moon rising in a warm southeasterly breeze.

Andy is one of the gentlest souls I have ever known. He is my rock of Gibraltar, the one down on the street who holds the ropes that keeps this Macy’s parade balloon from flying off and lodging in power lines. He is the quiet soul that consoles me when my heart is broken one more time as yet another of my never-ending bids to save the world crashes and burns. He is the soft laughter that lovingly endures the small zoo I have assembled and the jungle garden I have grown that we live amidst.

His soft snoring is the last thing I know at night and his voice is the first thing I listen for in the morning. I honestly have no idea why he has remained by my side all these years. But I will be eternally grateful that he has.

I heard the following words to a song on the radio last week and immediately thought of Andy. I think they beautifully describe the man whose soul I share and whose life has made mine complete.

How many times do I have to tell you Even when you're crying you're beautiful too The world is beating you down, I'm around through every mood You're my downfall, you're my muse My worst distraction, my rhythm and blues I can't stop singing, it's ringing in my head for you…

Cause all of me Loves all of you Love your curves and all your edges All your perfect imperfections Give your all to me I'll give my all to you You're my end and my beginning Even when I lose I'm winning John Legend, “All of Me,” Love in the Future (EMI Music Publishing, 2014)

A Day of Gratitude


In the eight years since my dear mother died, Mother’s Day has been a rather painful reminder of her absence. I attempt to focus on my gratitude for all she was and all she did for me, my two siblings and the many people she brought under her wings. Even so, there is a dull ache in my heart each year as this day approaches.

As with all commercialized holidays today, we are pounded by relentless advertisements which exhort us to conditionalize our love of others by our willingness to spend money on any number of consumer goods and services – If you really love them, you’ll buy them our products. These inescapable tawdry messages serve to remind me of how far from my own mother I am and how far from the intended appreciation of mothers our annual feeding frenzies at the malls and chain restaurants have become.

I have been asked to speak tomorrow to a Mar Thoma Catholic parish in Seminole County by a colleague at the university who is affiliated with that tradition. The topic assigned was the history of Mother’s Day. I share below my comments to the body tomorrow.

Happy Mother’s Day to all mothers, past present and mothers yet to be. Though we may not tell you often enough, we will always be in your debt. On behalf of all your children, we thank you from the bottom of our hearts.

I appreciate Dr. Jacob’s invitation to speak to you briefly on the history of Mother’s Day this morning. As is often the case, such invitations provide the opportunity for enlightenment on subjects many of us thought we already knew about but ultimately find that we actually knew very little about them. So I thank you for the opportunity to learn and to speak to you this morning.

Mother’s Day arose out of compassion

According to a very helpful National Geographic Magazine site on this history, what became America’s Mother’s Day began in the years just before the American Civil War. A Virginia women's organizer Ann Reeves Jarvis held annual Mother's Day work clubs across the western portion of the state to improve sanitary conditions for families and try to lower infant mortality by fighting disease and curbing milk contamination. From the very beginning Mother’s Day arose out of compassion for children by concerned mothers.

During the Civil War, that focus shifted. Mother’s Day became an occasion for tending to the many sick and dying soldiers from both sides during the war. In the years following that war, Mother’s Friendship Day became an annual event organized to unite former foes and encourage peace-making. Julia Ward Howe — best known as the composer of "The Battle Hymn of the Republic"—issued a widely read "Mother's Day Proclamation" in 1870, calling for women to take an active political role in promoting peace.

It would be the daughter of Ann Reeves Jarvis who would be responsible for the event we celebrate today. Anna Jarvis was never able to become a mother herself. But when her own beloved mother Ann, the founder of the Mother’s Day movement, died in 1908, Anna Jarvis organized Mother’s Day observances in West Virginia and Philadelphia as a day where people should go home to spend time with their mother and thank her for all that she did. It was through Anna’s persistence in lobbying President Woodrow Wilson that the second Sunday in May was set aside as a national holiday in 1914.

But it would cost her everything….

It’s important to recognize that Mother’s Day was not designed to be a celebration of motherhood generally but rather a very specific day to say thanks to one’s own mother. And while it is hardly surprising that this holiday, like all the rest in an  unreservedly capitalist culture, quickly turned into a highly commercialized event, the rapid transition of Mother’s Day to a commercial gold mine centering on the buying and giving of flowers, candies, and greeting cards deeply disturbed Jarvis. She would dedicate the rest of her life as well as her sizable inheritance to returning Mother's Day to its reverent roots.

Jarvis died penniless in a sanitarium in a state of dementia in 1948. She was a woman who could easily have profited from Mother's Day if she had wanted to. Instead, she railed against those who did, and it cost her everything, financially and physically.
In the end, it would be American commercial interests who would emerge victorious. A holiday begun to encourage people to go home to spend a day with their mother will prove this year’s most popular holiday for dining out. About 133 million Mother's Day cards will be delivered this year, according to Hallmark Cards, the primary beneficiary of Mother’s Day commercialization. After Christmas, it's the second most popular holiday for giving gifts in America. The National Retail Federation estimates that Americans will spend an average of $162.94 on mom this year.

Mother’s Day has also become an international observance. In much of the Arab world, Mother's Day is on March 21, which happens to loosely coincide with the start of spring. In Panama the day is celebrated on December 8, when the Catholic Church honors perhaps the most famous of mothers, the Virgin Mary. In Thailand mothers are honored on August 12, the birthday of Queen Sirikit, who has reigned since 1956 and is considered by many to be a mother to all Thais.

Though cards, presents and meals out at a restaurant are a far cry from the day spent at home with mother to show one’s appreciation that this holiday’s organizers originally intended, it is hardly surprising that a day to honor mothers has become a permanent part of human cultures. The truth is, all of us owe our mothers much, even if it is simply for our very existence. Mothers play an enormous role in human development. We all owe much to our mothers, indeed. Today I hope each of you will take the time to tell them so, even if it is just a prayer of gratitude for a now-deceased mother like my own.

A Prayer for our Mother(s)

I close with two prayers from the Mothering Sunday liturgy from the Church of England in my own Anglican tradition. Let us pray:

Prayers adapted from “New Patterns for Worship, A Service for Mothering Day,” Church of England website found online May 10, 2014 at http://www.churchofengland.org/prayer-worship/worship/texts/newpatterns/sampleservicescontents/npw14.aspx