Living Sacraments – A Beloved Nanny and a Rose of Sharon 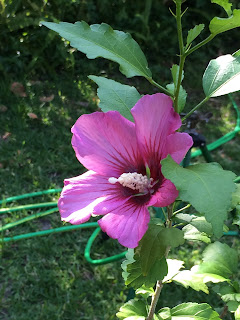 A sacrament is “an outward and visible sign of an inward and spiritual grace” according to the Episcopal Book of Common Prayer. When a sacrament is engaged, realities long since gone are relived, not as a mere commemoration of a past moment but as a reentering into those events here and now just as they originally occurred.

Sacraments have a way of making people long gone present once again. How many of us have had the experience of sharing a story about a loved one not present with us, perhaps no longer even living, and in the midst of the story, we who knew and loved this person find ourselves transported to that time and place. We laugh as if the amusing event was happening right here and now. Perhaps we weep as we remember the sorrow we felt at that moment and our hearts ache as if that sadness was occurring as we spoke.

Though we often do not know how to explain it, we know there is something beyond mere recollection and memory occurring there. For that moment, we are transported. We are there. And the persons we remember are there with us. 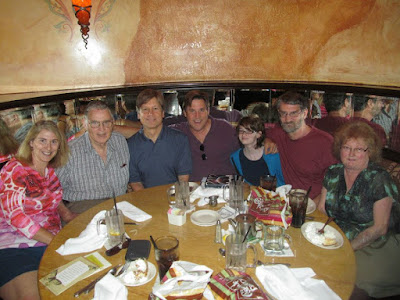 Loved Ones Once Again Present

I recently got my 23andme results. I have long told people I was Celt and Kraut to the bone. I had no idea how true that was. My genetic lineage was 52% British Isles (a good chunk of which was Irish) and another quarter of my genes came from Germany. 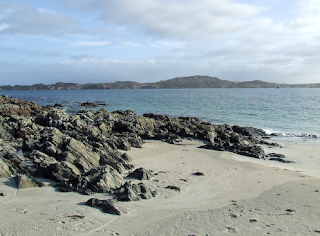 Celts have long understood the notion of “thin places” where the veil between this world and the next was particularly thin. When one visits a thin place, like the week I spent in Iona, it is possible to feel the presence of what lies on the other side of that veil. That includes the loved ones who are no longer physically present with us. Indeed, the Celtic festival of Samhain which became syncretized as the Christian feast of Halloween, celebrated the night of the thin veil when those on the other side could cross back over to visit the living. 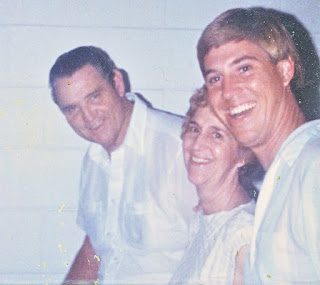 But it is not necessary to travel to faraway places to have such an experience. I feel the presence of my parents every day the moment I awaken to see their faces smiling back at me from the photos above my family altar across the bedroom. I sometimes hear their voices in my head: “Now, son, don’t be ugly,” my Mother softly chides me when I am being particularly uncharitable, using my gifts of wit and intellect to say something, well, ugly about someone else. And I hear my Dad gently reminding me “Son, you worry too much. It’s all going to work out,” when I am stressing about dealing with his estate.

But the sacramental ability to be present with loved ones and to reengage the moments of your life they filled, can be much less conscious, intentional or expected.

Clearing the Land for a New Home 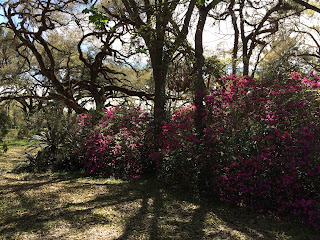 I come from a long line of gardeners. My Dad began and ended his teaching career as an agriculture teacher with a long stint of Civics, Florida history and Driver’s Education in the middle. My Dad taught me most of what I know about plants. And I have a jungle jammed with foliage that reflects that legacy.

Those lessons began early in my life. My father, brother and I cleared the land on which our home would eventually be built by our best friend’s father. It had been a veritable thicket before, a subtropical hardwood forest that had overtaken a former settlement of mainly African-American families who worked at a turpentine plantation there called Edenfield. 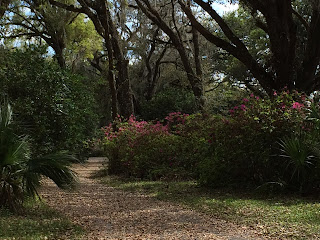 As we cleared the property we found piles of tin slats used to gash the trunks bark of the pine trees and then direct their sap into terra cotta pots which collected them. Fragments of those pots were also scattered over the 12 acres we cleared as well as brightly colored bricks from the foundations of their houses.

I came to respect the power of lighter knots, the stumps of pine trees with their crystallized veins of pine sap that once fed a naval stores industry whose products helped preserve the wooden ships of the 19th CE. The lightard knot, as many in that small town called it, was both a highly combustible starter for a hot burning fire as well as a dense slab of wood that could do real damage when applied to someone’s head. The threat of being “slapped up side the head with a lightard knot” could readily bring fear and trembling to the offending child in the backwoods of 1960s Sumter County.

Even today as I laugh about that expression, I do so with a tinge of more than a little nervousness. 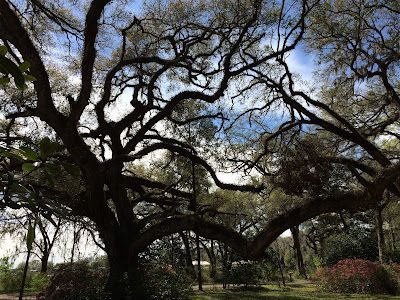 The clearing we achieved was selective leaving the big trees, including a majestic split trunk live oak that is no doubt 200 years old or more, while clearing the brush from the ground to create a 4 acre lawn. There we planted a wide range of ornamentals including at least 300 azaleas. In the springtime, the new Edenfield was ablaze with color. 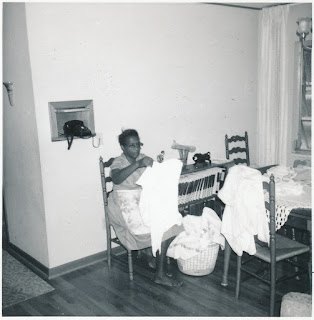 Some of the plants came to be at our home as a result of our Nanny, Henrietta. She was a middle aged African-American woman who had raised her own five children and now was raising a granddaughter and caring for an adult mentally handicapped son. I suspect she had had little formal education in her lifetime. Schools for African-Americans were not a priority for state and local governments in the early 20th CE Jim Crow South. But what she lacked in the regulated system of knowledge that European origin cultures have held so dear she more than made up for in wisdom.

Our nanny was hardly a luxury for an elite family household. My Mother worked full-time as the office manager for a local USDA agency that made government insured loans to farmers. Truth be told, she ran that office and her untiring work ethic prompted her to be in that office long after closing and on most weekends though her pay grade never reflected her contributions, thanks to the glass ceiling. My Mom was 40 when my Sister was born. Henrietta was a godsend, not only caring for my Sister, whom she came to call “my baby,” but doing the laundry, cleaning and cooking. 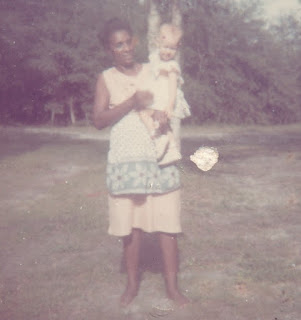 I suspect my love for soul food and soul music comes from Henrietta. She was the one who taught me about black people. “You know, we have a nasty name for you, too,” she revealed one day upon inquiry. “Crackers.” Her very presence in our home was the mirror that reflected the steaming cauldron of prejudice in which I was unknowingly being raised. As a result, I became familiar with the concept of cognitive dissonance early in life. Her very existence prompted me to ask questions about “the way things are,” a process that continues to inform my interactions with the world to this day.

I will always be grateful for her loving care and her wisdom. I live my life aware of the debt I owe to this unassuming woman who loved flowers and the white children she helped raise.

It was Henrietta who brought the Rose of Sharon to our home. Henrietta was prone to snap off a tip of a plant and take it home, nourish it and draw from that modest beginning a full-grown flourishing plant. She sometimes said, “Stolen plants grow the best” referring to the little slips of plants and pods of seeds she would sometime collect and slip into her apron pocket on her walks around her neighborhood, a practice both my Father and I also regularly engaged. Indeed, my jungle is fully of plants and trees that have arrived here from around the world in just that manner. 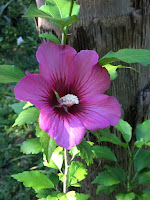 “You just stick this little bit of it in the ground and keep it watered and it’ll grow good,” she said. And they almost always did.

The Rose of Sharon, or Althea as she and my Dad called it, flourished. I quickly learned that you could easily propagate these plants by both cuttings and by the furry seeds they produced in pods after the bloom had faded. Unlike the tropical hibiscus of whose family this plant was a member, the Altheas were not cold sensitive and grew up into northern states where the hibiscus we grew in our yard (and protected from the occasional freezes) could survive for longer than a summer only in pots brought indoors. 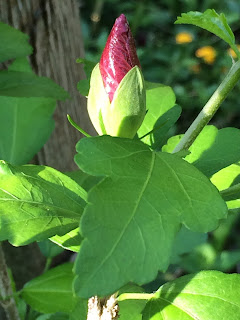 The progeny of Henrietta’s original Althea (which still grows in the backyard of our family home in Edenfield) now inhabit my jungle here in the heart of Orlando. This past week as I came out the door to head to St. Richard’s to lead Morning Prayer, I noticed that Henrietta’s Rose of Sharon was blooming. It was a deep crimson colored bud that would open to a vibrant red flower before the day would close. By tomorrow, it would be gone, a greyish lavender shriveled blossom which would eventually fall to the ground.

No small analogy to the transience of life, no?

I stood there savoring that moment. The early morning sun had filtered through the green wall of trees and plants in the front illuminating the flower. It was a moment in which an outward and visible sign permitted an inward and spiritual grace to be present. For just one moment, I could hear her voice and see her face. She was truly present with me if ever so briefly.

Just as a wave of bittersweet sadness began to sweep over me, I felt my heart warm. And as a smile crept across my face, I heard my own voice say, “Good morning, Henrietta.” 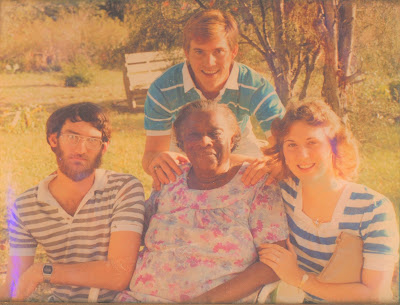